I traveled to the island of Penang to celebrate Chinese New Year. Penang is on the western coast of Malaysia. I live in Kelantan, the eastern coast, scraping the bottom of the Thai border.

The seven hour bus ride took me through terraced hills, hairpin turns, and so many shades of green. In proper Malaysian style, we stopped for three tea breaks along the way.

There is a distinct flavor of British colonialism in Penang. After getting off the bus, I took the ferry into Penang from a town called Butterworth. 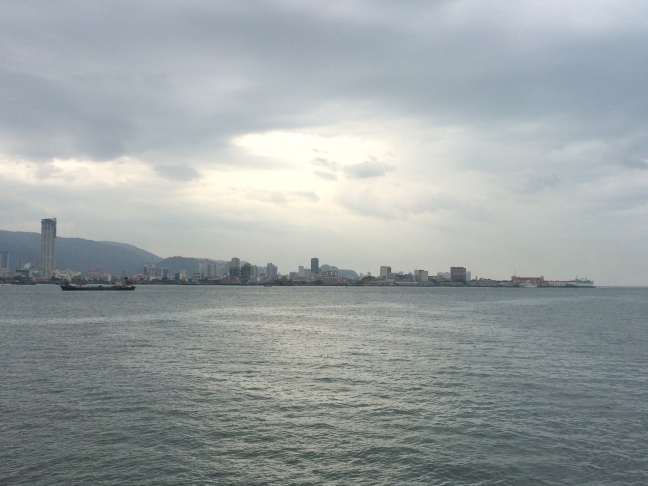 The Penang skyline is filled with high-rises, but the city wasn’t always that way. I stayed in the old city, Georgetown. A vestige from the East India Trading Co., Georgetown is a UNESCO World Cultural Heritage Site for it’s now-rare Chinese storefront architecture.

Penang feels drastically different from Kelantan. There’s a large Chinese-Malaysian population, so unlike in Kelantan, many women don’t cover their heads. Even Muslim women wear t-shirts in public sometimes. That doesn’t happen in Kelantan.

I’m in Penang for a few days to celebrate the start of Chinese New Year. It’s the year of the monkey! Red lanterns are hung everywhere, Chinese temples are in full-swing, and so are tourists.

On the evening of the first night of the New Year, February 8th, I went to the Kek Lok Si Temple just outside of the city. I’ve never seen anything like it! It is home to a solemn temple and an extravagant light display.

Shoes came off outside the temple, and I walked in among the incense. Everything was decked out in gold and red, and on the altars were offerings of mandarin oranges and other fruits. But mostly oranges. 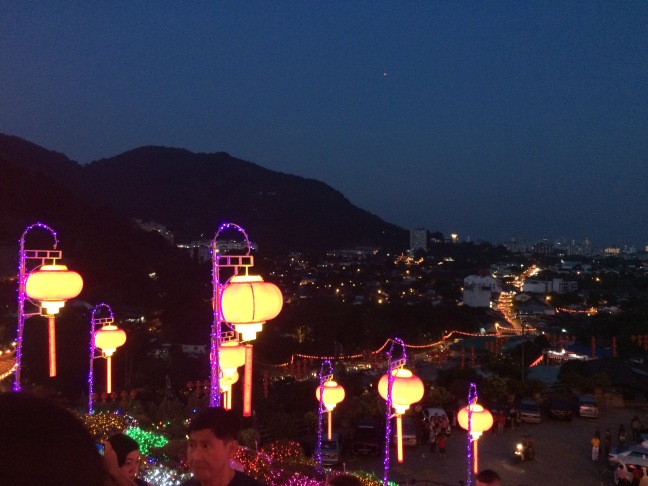 The sun set while I was in the temple, and as it grew dark a crowd gathered on steps outside. Flanked by lanterns, ascending the steps felt particularly religious. Almost everyone was dressed in red, and whole families gathered to celebrate the yearly tradition of coming to see the lights. 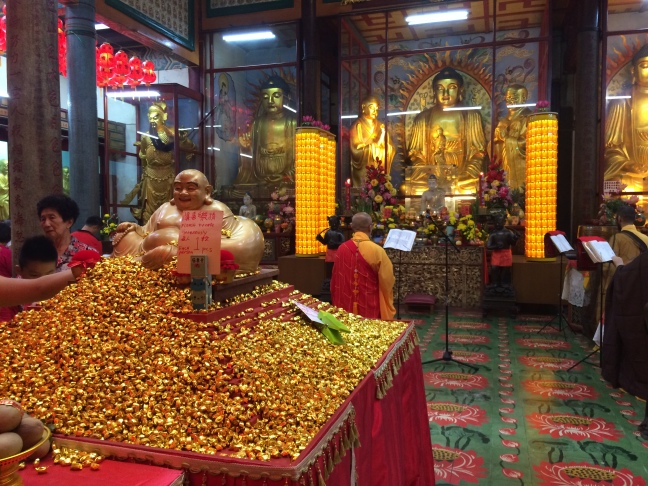 I climbed higher through a maze of stairs, lights, and people. Near the top was another temple. A religious ceremony was taking place inside. In the doorway, person after person left a small gold offering.

I walked up the stairs and was bathed in an orange, golden glow. For just a few moments, the crowd had gone every place but here, and it was just me and these three massive, golden buddhas.