I spent three days on the island of Langkawi, a rocky three hour ferry ride north of Penang. When the students and all the other teachers found out I was going to Langkawi, they said I HAD to go up the famous cable car.

To get to the cable car you pass through a miniature Malaysian DisneyLand type situation. It is called the “Oriental Village,” and had a million ways to separate you from your ringgit.

The cable car is a big deal not only because it’s beautiful. It’s also the longest cable car in Malaysia and has won a lot of engineering awards for its fancy steel rope.

As you would expect, it’s a long wait to get your turn up the mountain. I was eventually whisked away into a summertime version of On Her Majesty’s Secret Service. 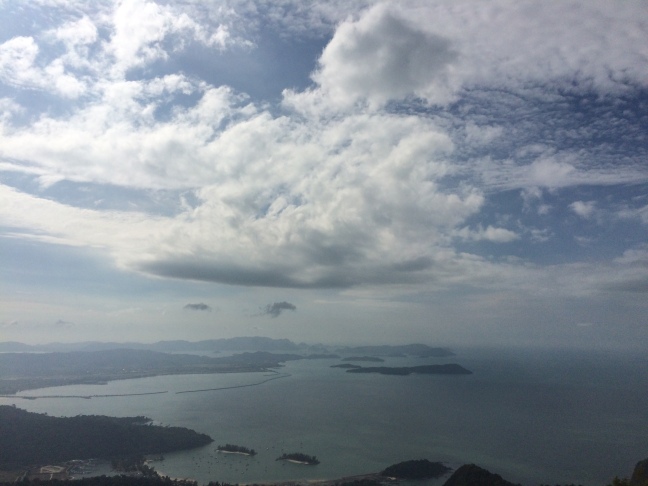 There are a few windy, sunny, surreal observation decks at the top. Here’s the view facing east, toward the mainland. If you look very closely at the bottom, under those two little islands, there is a sea of tiny boats.

This is from the other side, facing west. If you went straight out from here, you might hit the tip-top of Indonesia, and you’d for sure run into Sri Lanka and the southern-most tip of India. Where does the sea end and the sky begin?

Here’s facing North. If you looked really closely, maybe you could see Thailand.