Malaysian students and teachers take their holiday from late May to early June. This year it marked the halfway point for my time in Malaysia. The school holiday was a time to relax and and consciously or unconsciously reflect on the past five months. How has my perspective changed? What’s been most surprising? What have I learned?

I can say few things about Malaysian culture as a whole. I only know some things about conservative Malay Muslim opposition party culture of the lower middle class slightly south of Kota Bharu, Kelantan. I’m sure the experience of being Malaysian or of being an American in Malaysia would be very different in Kuala Lumpur or Borneo. I cannot say “Malaysians” or “Kelantanese people” or “Malaysian Muslims” or “Muslims” are this way or that way. All I can say is what I’ve experienced based on the people I’ve met who have been part of those groups.

I’ve taken a few short trips, but have otherwise spent the last five months in a semi-rural area of conservative, religious Kelantan. Everyday I learn a little more Bahasa Melayu (BM), I try a new food, and I have an edifying conversation or two. Every week I have a number of confusing phone conversations, get lost driving around Kota Bharu, and meet friendly strangers. Every month has felt completely different from the last, and each has been an enlightenment from the confusion and questions of the month before. Every time I learn something new, I think “HOW could I have gone all this time without knowing that!?”

Here are a few things that have surprised me so far about Malaysia, mostly Kelantan:

Here are the things I’ve learned most about:

I am embarrassed by how little I thought about Asia before coming here. It’s an enormous geographical region, and its history, politics, economy, and society heavily influence the rest of the world. Every time I’m flabbergasted that my students don’t know where the continent of Europe is on a map, I have to remind myself that most rural U.S. students would not know Malaysia is a country.

Almost everyone I spend time with on a daily basis is Muslim. I understand more about Islam in everyday life, and have had many conversations that dive deep into the meaning behind specific practices. I’ve also realized how many aspects of life are not influenced by religion, and how universal personality traits and group dynamics are. I’ve never thought so much about the purpose of religion, the differences and similarities in religions, and the influence of religion as I do now.

I’ve observed that the hardest parts of this experience have been general feelings, and the happiest parts have been specific moments.

Some of the difficult parts of this experience have been when I felt misunderstood as a person or ineffective at work. There are some logistical difficulties, too, like learning to live in the heat and not being able to communicate clearly.

The happiest moments have been joyful, vivid snapshots. Like standing on the beach of a beautiful island at sunset with my two dear roommates, eating spicy fried chicken on a stick with my students, looking out at the green, green tea fields of the Cameron Highlands, going to my favorite local night market to get the best Kuey Teow soup in Malaysia, speeding through the streets in the back of a tuk-tuk on the way to a Thai boxing match, and hearing the birds and lizards and ducks and roosters early in the morning everyday before the sun comes up.

I’ve gained a lot of confidence and humility in the last five months. Now more than ever, I look at things in a way relative to a person’s experiences, opportunities, culture, religion, and nationality. As I’ve learned what it means to be Malaysian, I’ve also learned what it means to be American. I have no idea what I will learn or how I will be changed in one month or six months from now, but I’m excited to find out. 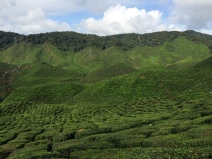 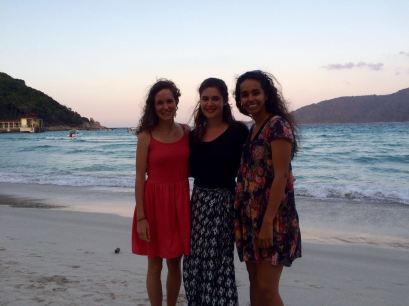